I knew I’d be back in the land of the Long White Cloud before long. The Routeburn Track in New Zealand’s south island is simply The Best Hike. Not many long white clouds this time though – rather rain, snow and sunshine, in not quite equal measures.

Our challenge was the Grand Traverse, which takes in the Greenstone Valley for a couple of days, before joining the famous Routeburn Track for another three. This November the Fiordlands were having a late blast of winter. We woke to a dusting of snow on the peaks and a chilly wind in the valley.

The first two days are the warm up – a gentle hike up the expansive Greenstone Valley.

The Fiordlands has a very wet climate with an average of 200 rainy days a year (with between 1,200-8,000 mm of rain a year). There’s no shortage of waterfalls and rivers here.

Incredibly, we managed to dodge this storm. 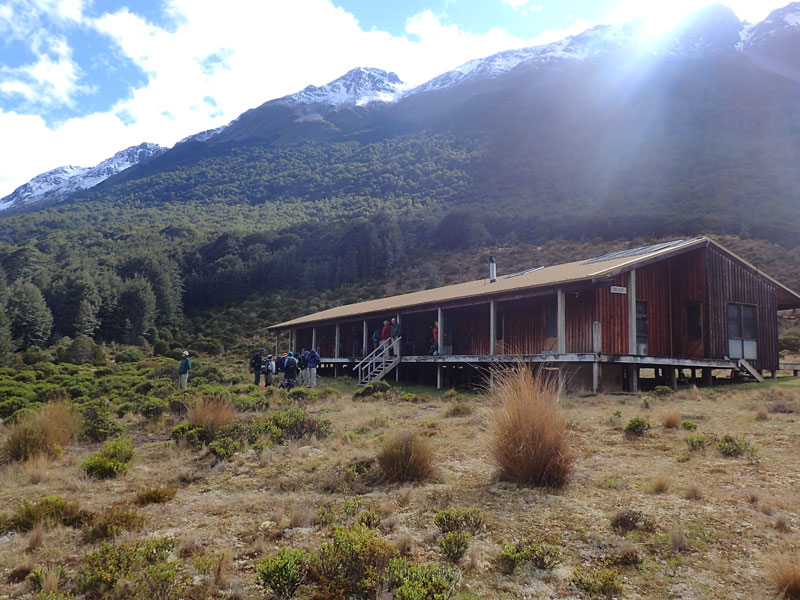 After a rest day we joined the Routeburn Track and that’s where the weather kicked in. It started as rain, then sleet, then turned to snow as we got above 600 metres. There’s something utterly magical about walking through falling snow. Thank you weather Gods!

Day five, we woke to a blanket of snow and a bright blue sky. Lake Mackenzie reflecting the mountain beauty: 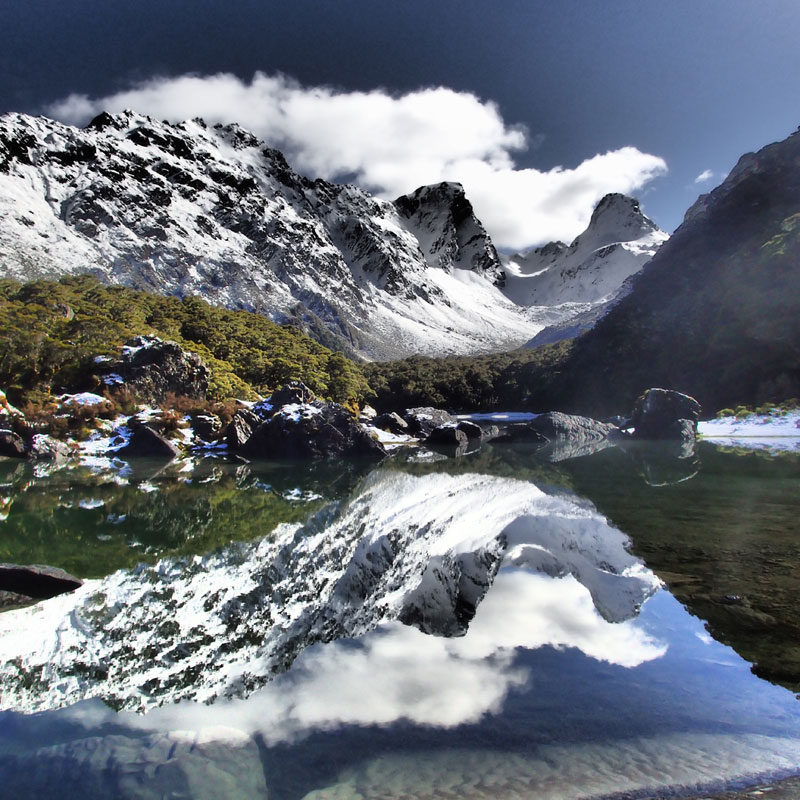 Is there anything better than walking through fresh snow on a sunny day? 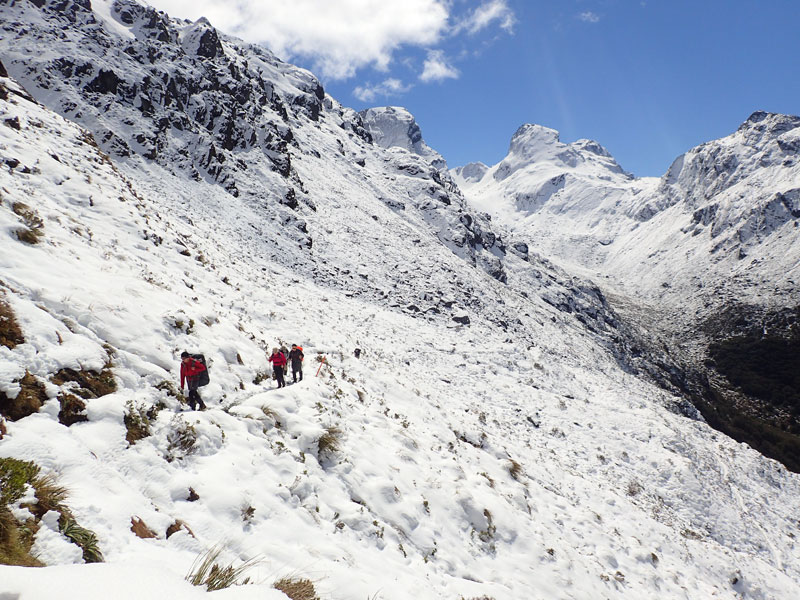 Just before we headed around the corner to hike along the Hollyford Face, I caught a last glimpse of Lake Mackenzie below.

Once we’d passed over the Harris Saddle (which is just under 1300 metres high) we were met by this view of Lake Harris:

New Zealand’s ‘Southern Alps’ may be much smaller than their namesake, but they’re no less beautiful. We were so lucky to see this area in snow, thanks to a late burst of frigid air from the southwest. 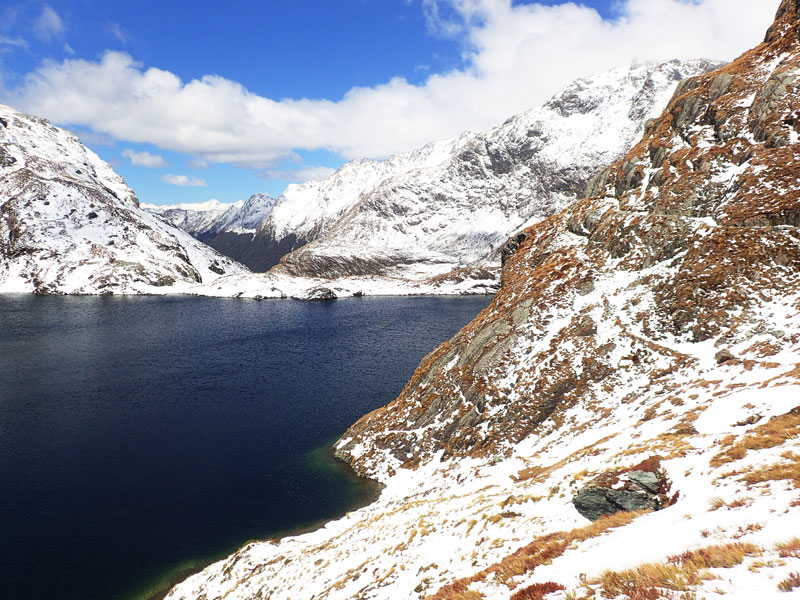 As we hiked down the Upper Routeburn Valley towards our hut at Routeburn Falls the snow was turning to water. The walk became more of a wade down a stream. Don’t expect to keep your feed dry on this hike.

The final day takes you through the magnificent Routeburn Flats, where everything went from white to green. 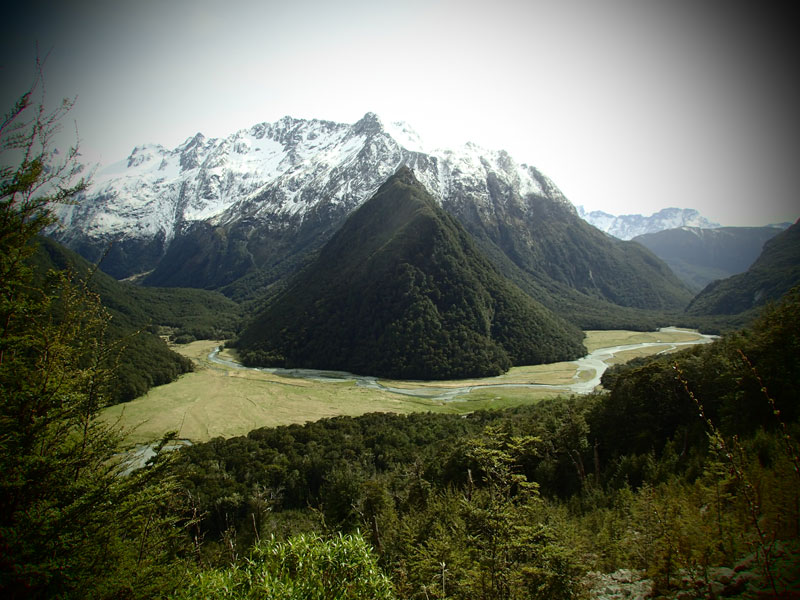 And finally, the drive back to Queenstown. Don’t forget to look back at the view!